Leading international recruitment partner to the fashion and retail sector
Back to Blog November 15, 2018

London’s West End has retained its position as the best-performing retail centre in Europe, according to new figures from an independent retail real estate agency.

The new list from Harper Dennis Hobbs that ranks the top 50 shopping destinations, also shows Paris, Madrid, Rome, Berlin and Munich have also held onto their place in the table.

With a market share of almost €10.4 billion (£9.2 billion), the West End is continuing to thrive, despite competition from new retail developments such as King’s Cross and Westfield London’s 732,000sq ft extension, as well as continued loss in the value of the pound against the euro.

Meawhile, despite relatively flat retail sales growth in Germany, the Berlin market proved its strength and following the launch of two new shopping centres, it moved into fifth place, displacing Munich in the process.

Amsterdam also jumped from 10th place in 2017 to eighth this year following strong retail sales growth and the renovation of Kalverpassage, a shopping arcade at the southern end of Kalverstraat. 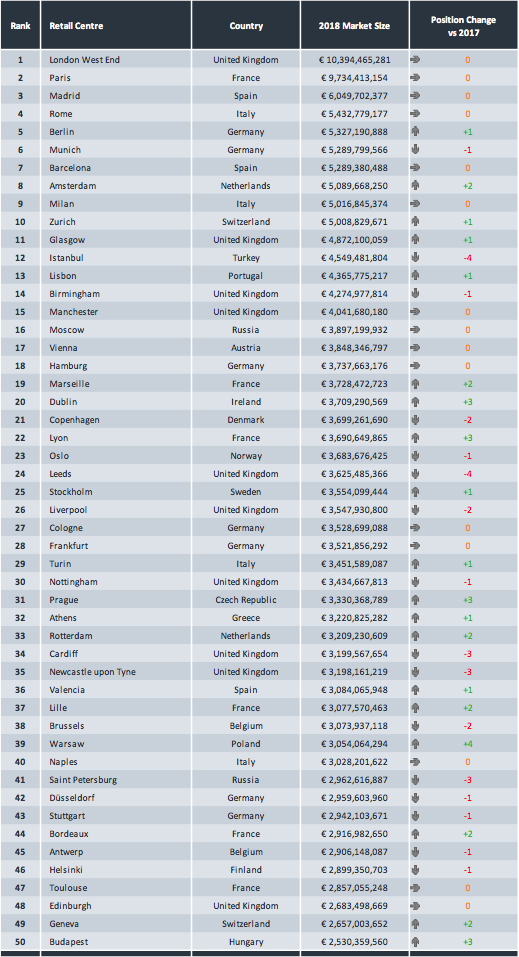 Comprising only two countries, the UK and France, the table shows the continued dominance of retail centres in and around London and Paris.

Harper Dennis Hobbs head of retail Jonathan De Mello said: “These rankings are particularly useful for identifying growing markets, allowing retailers to understand which centres are on the rise and plan accordingly.

“This latest version highlights how macro-economic and political conditions impact retail spend, even in the strongest retail centres – illustrated by the decline in spend in UK cities, as the pound has continued to fall against the euro with Brexit looming.

“This year we’ve also ranked the top 10 shopping centres, and found that the very strongest centres in Europe – both of London’s Westfield schemes – actually rank higher than some retail cities.