Leading international recruitment partner to the fashion and retail sector
Back to Blog December 18, 2014

The royal couple were welcomed by ecstatic royal watchers as they arrived in New York on Sunday 7th December for their 3 day trip to the city that never sleeps. This trip promises to be something to remember both for the Royal couple and New Yorkers. With a hectic few days planned and Kate being 5 months pregnant, here at CVUK we are taking a look at Kate’s maternity style. Kate never fails to look anything other than elegant  and stylish whether pregnant or not but it seems that as soon as any woman in the public eye falls pregnant the spotlight gets bigger and more intense. However, with most pregnant women worrying about an unflattering photo being posted on Instagram or Facebook, Kate and her growing bump are put under a microscope quite literally by the worlds press.

With most of us looking dishevelled and jet lagged once we step off an airplane, the Duke and Duchess arrived in the city looking nothing less than the perfect couple. The press and awaiting public were hungry for a glimpse of the royals, with many onlookers having camped out all day. The couple were quickly whisked off into the luxury Carlyle Hotel, where Williams’s late mother Diana had previously stayed. Kate looked elegant in a coat by British maternity label Seraphine, while William looked dashing in a tailored navy suit. 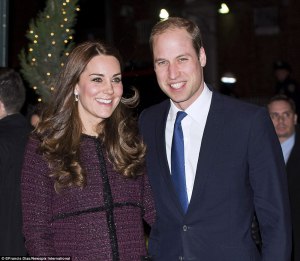 With the trip consisting of 3 very packed days, the couple’s duties began immediately. The Duchess stepped out for dinner in a Beulah London Amara Lace dress, this was the perfect combination of elegance and comfort and would be perfect for any Christmas party. The British brand was launched in 2011 and as well as creating stunning pieces it is also an ethical label, paralleling with the main reason for the couples trip which was William’s speech in reference to the animal trade in China. Within the speech William condemns the trade of elephant tusks and rhino horns as “one if the most insidious forms of corruption and criminality in the world.” 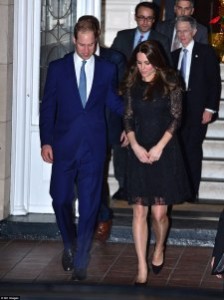 Another stop on their whirlwind store saw Kate visiting a development centre in Harlem, where she met some young children, many of whom were disappointed that she was not the princess from Frozen. It was here that she took part in Christmas gift wrapping and a craft experience with some of the grandmothers of the city’s poorest children.  Kate wore a black and white coat by British label Goat, however the coat had been modified and given extra length, to protect the Duchess’ modesty. 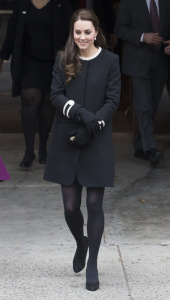 Upon arriving back from Washington, where William had meetings with President Obama, he reunited with Kate for an evening hosted by Hillary Clinton and her daughter Chelsea to recognise the Tusk Trust and other partners of William’s charity United for Wildlife. The former First Lady and the Duchess discussed the benefits of singing to babies and Kate’s visit to the Harlem developmental centre. The Duchess was not actually scheduled to attend this event as this was time for her to rest between her duties, however Kate was looking very well rested and happy to be in attendance. 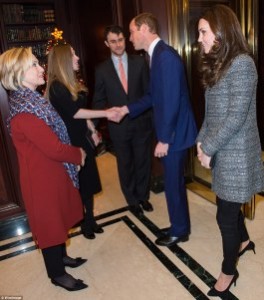 Before the black tie event at the Metropolitan Museum of Art to celebrate the University of St. Andrew’s 600th Anniversary, the Royal couple had time to meet Pop royalty Jay Z and Beyoncé at an NBA Basketball game. This was to help launch the new collaboration between the Royal Foundation, United for Wildlife and the NBA. The partnership aims to use sports stars to raise awareness about the importance of international wildlife conservation. Kate and William both dressed more casually for the event, Kate wore a grey coat by US designer Tory Burch, skinny jeans and heels. 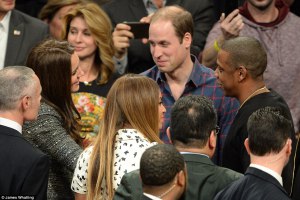 One of the Royal’s penultimate visits was to the National September 11th Memorial Museum and Memorial Reflection Pools. The couple took a moment to lay red roses at the site, a flower which has considerable significance with the city of New York. The Duchess added a pop of colour in a Mulberry coat to a rather sombre occasion.

Kate never disappoints us with her elegance and we wait with baited breath to see the rest of her pregnancy style.