Leading international recruitment partner to the fashion and retail sector
Back to Blog February 1, 2013

Is The End Of HMV Really So Shocking? 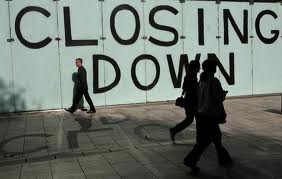 The chaos surrounding the collapse of high-street entertainment retailer HMV has filled our screens and radios since the announcement came just over two weeks ago (first they wouldn’t accept gift cards or store credit and now they’ve axed over 100 head office positions in London), but as we sat staring at the Metro on the morning commute, was it really that unexpected?

Along with HMV, Blockbuster and Jessops and have also gone into administration since the end of 2012, but there’s one thing that stands out as the common denominator between all of these; they are all victims of technology. Sitting on the train at 7.25am each morning there is not one person without an iPhone, iPad or Kindle resting on their lap, and as developing technology continues to replace the way we enjoy entertainment, is a sticky end set to meet book stores and magazine shops?

There isn’t much an iPhone can’t do, whether it’s taking photos, making notes, listening to music, watching films or making video calls, it’s all immediately available at the click of a button or the flick of a screen. You can now live your entire life through a device that was once invented simply to enhance the art of communication, and as brands such as Apple continue to develop newer and ‘better’ ways of doing things, the ‘old’ ways struggle under the weight of this advancing technology.

In the Q1 of 2013 (ending December 2012) Apple sold over 47.8 million iPhones and 22.9 million iPads and Amazon announced last year that at one point customers were buying over 1 million kindles from the etailer each week. With sales like this only set to grow throughout 2013, the effects on companies like Jessops and HMV are inevitable. Not only has the ease of illegal downloading contributed to a drop in film and music sales but with the introduction of iTunes, and LoveFilm there simply isn’t the demand for entertainment shops, and so the inevitable demise of HMV, Jessops and Blockbuster. The news of these stores entering administration was met with anger and sadness, expressed in great volume on Twitter and Facebook, but really do we have the right to complain when it’s us that is responsible.

How long will it be before we’re all reading off our screens and the lack of book sales lead to the closures of book stores and publishing houses? Hopefully people will begin to realise the beauty of reading from a print magazine or book rather than from a hand-held device before it’s too late.