Leading international recruitment partner to the fashion and retail sector
Back to Blog January 15, 2010

Uggs have been a staple in everyone’s wardrobe for a number of years now, and never has this been so prominent than during our current spout of horrible weather, where every woman, child, baby, sometimes men and even dog has been seen wearing a pair.  (Uggs for pets don’t officially exist, but if you happen to see ‘P’Uggs‘, Uggs for dogs on the shelves in the near future, you heard it here first). 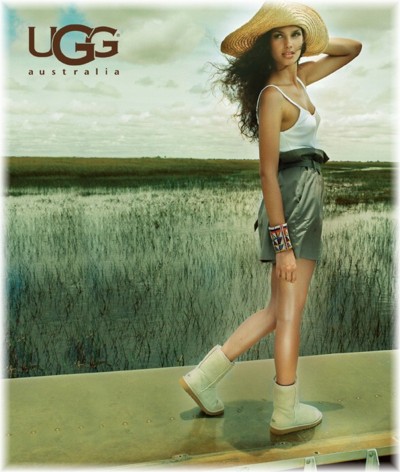 But what is the secret to the Ugg success?  How have a boot, originally made popular in the ’60’s by pro surfers in the southern hemisphere to keep their toes warm after a winter session, become such a trademark success?  Ugg’s aren’t even very practical, especially not when wet from rain or sleet, when they end up looking like a soggy puppies.  They are also highly priced and definitely not animal friendly as they are made directly from sheepskin.  Aesthetically, they aren’t exactly very glam or flattering, and yes they may be comfortable and practical but so are Crocs apparently, and lets hope last summer is the last time we ever see those ghastly creatures.

The 00’s certainly were the decade when the world of celebrity set the standard for fashion and new styles were decided from what came straight off the backs, or feet of whoever was in the public eye.  Maybe the success of Uggs was down to their celebrity endorsement when everyone from SJP, Kate Hudson and Pamela Anderson was seen wearing them in the early noughties.  Although Pammy soon renounced any affiliation to the boots when she found out what they were made of.  Well ‘duh‘ Pamela, maybe she just sticks to the rip-offs from down the market now.

Despite numerous recent articles deeming the Ugg one of the great fashion disasters/fads of the last decade, on the contrary it seems as though they have actually been à la mode for a sufficient amount of time now to be crowned of the bigger success’ of recent times.  So much so in fact that Ugg Australia have recently announced that they will join the long list of companies to collaborate with Tamara Mellon’s Jimmy Choo.  Quite a surprisingly collaboration really, and it will definitely be interesting to see the product range, short furry heels?  Heely Ugg boots?  Appartently there will be 5 different styles in this range and prices will start at a predictable £495.  This range will be available in all department stores and directly from Ugg Australia themselves. 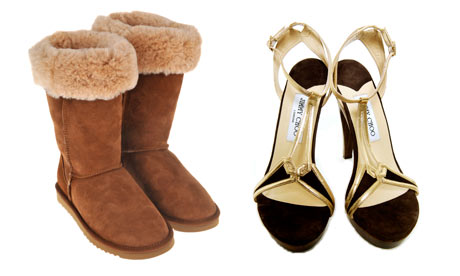 Clearly with fashion conscious marketing moves such as this, the Ugg is here to stay for the forseeable future as we tread comfortably through the snow into 2010.